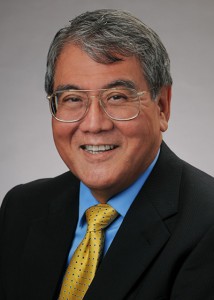 Rick Tsujimura joined the firm as counsel in July 2012. He was admitted to practice law in the State of Hawaii and before the United States District Court, District of Hawaii in 1975.

Mr. Tsujimura practices in the area of governmental relations and provides strategic business advice to companies seeking to enter and improve their business operations in Hawaii. He has worked in government as a deputy attorney general, in business as assistant general counsel for AMFAC, Inc., and as president of AMFAC Property Development Corp. responsible for the Waikele development and master planning of AMFAC’s Kaanapali development. He was a principal in Mills Dowling Tsujimura, a residential development company active in all four countries.

Active in the community, Mr. Tsujimura is currently the chair of the Board of Governors of the East West Center, which for over 50 years has served as a U.S. based institution for public diplomacy in the Asia Pacific region. He serves as the chair of the U.S. Board of Global Hope Network International and on the advisory board and leadership of the Geneva Institute for Leadership and Public Policy, both based in Geneva, Switzerland. He also serves on the board, subsidiaries, and committees of the Queen’s Health Systems, Hawaii’s oldest and pre-eminent family of healthcare-related companies. He recently was appointed to the City Charter Commission, City & County of Honolulu.