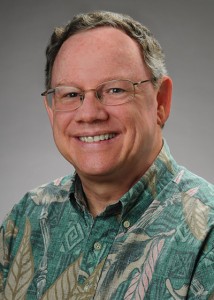 James K. Mee was a partner at Ashford & Wriston. He initially joined the firm as an associate in 1982.

Over the years he curated a practice that included real estate transactions, property rights litigation, land use, estates and trusts, Hawaiian rights, and appeals. He was a skilled and conscientious advocate and a trusted partner and colleague.

Mr. Mee passed away on September 18, 2021. He is greatly missed by his friends and colleagues at Ashford + Wriston.

Mr. Mee was designated as a LEED Accredited Professional by the United States Green Building Council. The Leadership in Energy and Environmental Design (LEED) Green Building Rating System is the nationally accepted benchmark for the design, construction and operation of green buildings. He was among the first attorneys in Hawaii to receive this recognition.

Mr. Mee was, for many years, an associate member of both the Honolulu Board of Realtors® and the Hawaii Association of Realtors®

Mr. Mee was the recipient of the Hawaii State Bar Association’s 2004 Ki`e Ki`e Award for Pro Bono Service. This award is given to the individual who, in the opinion of the Bar Association, has contributed the most generously of his or her time in the cause of justice and advancement of our society.

Mr. Mee was listed in Best Lawyers of America® in the areas of Real Estate, Eminent Domain and Condemnation, as well as being listed in Hawaii Super Lawyers in the area of Eminent Domain. Mr. Mee also received an AV rating from Martindale-Hubbell.

Mr. Mee was twice named as Member of the Year of the Hawaii chapter of NAIOP, in 1998 and 2009. NAIOP, the Commercial Real Estate Development Association, is the leading national organization for developers, owners and related professionals in office, industrial and mixed-use real estate.