A. James Wriston, Jr.
Of Counsel 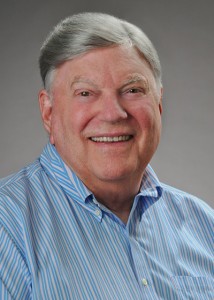 A. James Wriston, Jr.
Of Counsel

A. James Wriston, of counsel to Ashford & Wriston, has practiced with the firm since 1954.

Mr. Wriston was appointed as hearing officer of the disciplinary board of the Hawaii Supreme Court and has served as such for a number of years, and has also conducted a voluntary settlement conference, essentially mediation. He was named as one of the best real estate lawyers in Hawaii in The Best Lawyers in America, 1991 to present editions, and was featured on the cover of Honolulu magazine's April 1999 issue featuring the Best Lawyers in Hawaii. Mr. Wriston is a lifetime Fellow of the American Bar Foundation, a life member of the American Judicature Society and a member of the American College of Mortgage Attorneys.

Mr. Wriston is a trustee and past chairman of trustees of the Academy of the Pacific, and director of Maunalani Nursing Center and Maunalani Foundation. He is an emeritus member of the board of governors of the Honolulu Unit of the Shriners Hospitals for Children, and an officer and director of Friends of Shriners Hospitals for Children – Honolulu Unit. Mr. Wriston is the president and trustee of the Scottish Rite Foundation of Hawaii, which provides services to young children who have childhood language disorders, and operates the Masonic Public Library of Hawaii, which maintains a collection of Masonic works and Hawaiiana for the benefit of the public. He served as Sovereign Grand Inspector General in Hawaii for the Supreme Council 33° Ancient and Accepted Scottish Rite for the Southern Jurisdiction of USA and as such was one of the active members of the Supreme Council. He is now past SGIG and an emeritus member of the Supreme Council. He is a member and past president of the Rotary Club of Downtown Honolulu, is a director and past chairman of the Friends of the Cancer Center of the University of Hawaii, a director and chairman of the Children's Alliance of Hawaii, and is past director, president and chairman of the Diamond Head Theatre. He is also a past director and chairman of the Friends of the East-West Center and past director of Junior Achievement of Hawaii. He is also a member of the Royal Order of Jesters. Mr. Wriston is a member of the Pacific Club and Volcano Country Club and is an active supporter of the Honolulu Museum of Arts, the Hawaii Theatre and the Diamond Head Theatre.